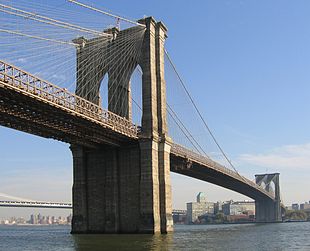 In 1883, a creative engineer named John Roebling was inspired by an idea to build a spectacular bridge connecting New York with the Long Island. However bridge building experts throughout the world thought that this was an impossible feat and told Roebling to forget the idea. It just could not be done. It was not practical. It had never been done before.

Roebling could not ignore the vision he had in his mind of this bridge. He thought about it all the time and he knew deep in his heart that it could be done. He just had to share the dream with someone else. After much discussion and persuasion he managed to convince his son, Washington Roebling, an up and coming engineer, that the bridge in fact could be built.

Working together for the first time, the father and son developed concepts of how it could be accomplished and how the obstacles could be overcome. With great excitement and inspiration, and the headiness of a wild challenge before them, they hired their crew and began to build their dream bridge.

The project started well, but when it was only a few months underway a tragic accident on the site took the life of John Roebling. Washington, carried on but shortly after was also severely injured. Washington suffered “the bends” while moving up too quickly from the deep water tanks used to dig the bridge’s foundations to bedrock.

“We told them so.” “Crazy men and their crazy dreams.” “It’s foolish to chase wild visions.”

Everyone had a negative comment to make and felt that the project should be scrapped since the Roeblings were the only ones who knew how the bridge could be built.

In spite of his handicap Washington was never discouraged and still had a burning desire to complete the bridge and his mind was still as sharp as ever. He tried to inspire and pass on his enthusiasm to some of his friends, but they were too daunted by the task.

With legendary determination, Washington, confined to his house in Brooklyn Heights, directed the work on the bridge from a distance, watching progress through a telescope.

He trained his wife, Emily Roebling, to relay his orders when she would visit the bridge nearly everyday.

Today the spectacular Brooklyn Bridge stands in all its glory as a tribute to the triumph of one man’s indomitable spirit and his determination not to be defeated by circumstances. It is also a tribute to the engineers and their team work, and to their faith in a man who was considered mad by half the world. It stands too as a tangible monument to the love and devotion of his wife who patiently relayed messages of her husband and told the engineers what to do.

Perhaps this is one of the best examples of a never-say-die attitude that overcomes a terrible physical handicap and achieves an impossible goal.

Often when we face obstacles in our day-to-day life, our hurdles seem very small in comparison to what many others have to face. The Brooklyn Bridge shows us that dreams that seem impossible can be realized with determination and persistence, no matter what the odds are. 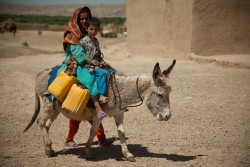